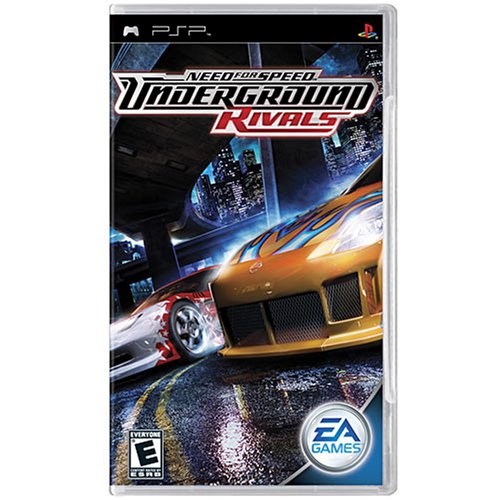 1467100
1767591
17%
available
Video GamesLegacy SystemsSony PSPGames
From the Manufacturer,Compete and earn respect in Need for Speed: Underground Rivals only available on the PlayStation Portable (PSP) handheld videogame system. Customize and take on the pinnacle Japanese and American tuner cars in a pursuit of total ownership of the street racing scene. A uniquely designed racing game based on the legacy of the hugely successful Underground series.,Features:,All new tracks and environments: Compete against your rivals in 10 all-new and visually distinct tracks. Each one has been specially designed to maximize the experience on the handheld platform.,Japanese customs vs. American muscle cars: Customize and compete against a host of high-performance tuner cars from Japan and America. Take on these rivals and find out whos best.,Head-to-head rivalry: Take on friends and foes in a range of new modes specifically designed for use via Wi-Fi. Its multiplayer gaming in which you earn respect and own the competition.,New ways to go underground: brand-new game modes that capitalize on the cutting-edge hardware features of the PSP handheld videogame system and deliver a highly competitive game play experience.