The Lord of the Rings: The Return of the King (Special Extended Edition) 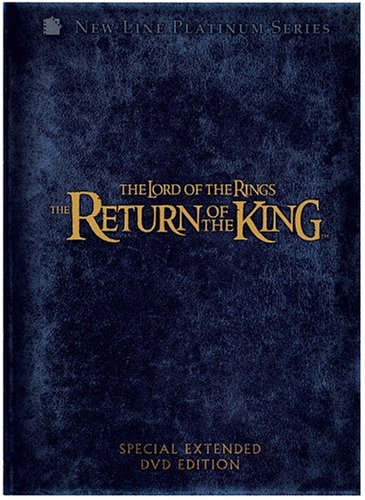 The Lord of the Rings: The Return of the King (Special Extended Edition)
Elijah Wood PG-13 Format: DVD
650کیلوگرم
B000634DCW

2973900
2973900
0%
available
Product Description,The WINNER of 11 Academy Awards* including BEST PICTURE is now 50 minutes longer! This extended version of the epic conclusion of The Lord of the Rings trilogy includes new score by Howard Shore and over 350 new digital effects shots.,,,Amazon.com,The greatest trilogy in film history, presented in the most ambitious sets in DVD history, comes to a grand conclusion with the extended edition of The Lord of the Rings: The Return of the King. Not only is the third and final installment of Peter Jacksons adaptation of the works of J.R.R. Tolkien the longest of the three, but a full 50 minutes of new material pushes the running time to a whopping 4 hours and 10 minutes. The new scenes are welcome, and the bonus features maintain the high bar set by the first two films, The Fellowship of the Ring and The Two Towers.,Whats New?,,One of the scenes cut from the theatrical release but included here, the resolution of the Saruman storyline, generated a lot of publicity when the movie opened, as actor Christopher Lee complained in the press about losing his only appearance. Its an excellent scene, one Jackson calls pure Tolkien, and provides better context for Pippin to find the wizards palantir in the water, but its not critical to the film. In fact, valuable but not critical might sum up the ROTK extended edition. Its evident that Jackson made the right cuts for the theatrical run, but the extra material provides depth and ties up a number of loose ends, and for those sorry to see the trilogy end (and who isnt?) its a welcome chance to spend another hour in Middle-earth. Some choice moments are Gandalfs (Ian McKellen) confrontation with the Witch King (we find out what happened to the wizards staff), the chilling Mouth of Sauron at the gates of Mordor, and Frodo (Elijah Wood) and Sam (Sean Astin) being mistaken for Orc soldiers. We get to see more of Éowyn (Miranda Otto), both with Aragorn and on the battlefield, even fighting the hideously deformed Orc lieutenant, Gothmog. We also see her in one of the most anticipated new scenes, the Houses of Healing after the battle of the Pelennor Fields. It doesnt present Aragorn (Viggo Mortensen) as a savior as the book did, but it shows the initial meeting between Éowyn and Faramir (David Wenham), a relationship that received only a meaningful glance in the theatrical cut.,And for those who complained, no, there are no new endings, not even the scouring of the Shire, which many fans were hoping to see. Nor is there a scene of Denethor (John Noble) with the palantir, which would have better explained both his foresight and his madness. As Jackson notes, when cuts are made, the secondary characters are the first to go, so there is a new scene of Aragorn finding the palantir in Denethors robes. Another big difference is Aragorns confrontation with the King of the Dead. In the theatrical version, we didnt know whether the King had accepted Aragorns offer when the pirate ships pulled into the harbor; here Jackson assumes that viewers have already experienced that tension, and instead has the army of the dead join the battle in an earlier scene (an extended cameo for Jackson). One can debate which is more effective, but thats why the film is available in both versions. If you feel like watching the relatively shorter version you saw in the theaters, you can. If you want to completely immerse yourself in Peter Jacksons marvelous and massive achievement, only the extended edition will do.,How Are the Bonus Features?,,To complete the experience, The Return of the King provides the same sprawling set of features as the previous extended editions: four commentary tracks, sharp picture and thrilling sound, and two discs of excellent documentary material far superior to the recycled material in the theatrical edition. Those who have listened to the seven hours of commentary for the first two extended editions may wonder if they need to hear more, but there was no commentary for the earlier ROTK DVD, so its still entertaining to hear Jackson break down the film (he says the beacon scene is one of his favorites), discuss differences from the book, point out cameos, and poke fun at himself and the extended-edition concept (So this is the complete full strangulation, never seen before, here exclusively on DVD!). The documentaries (some lasting 30 minutes or longer) are of their usual outstanding quality, and theres a riveting storyboard/animatic sequence of the climactic scene, which includes a one-on-one battle between Aragorn and Sauron.,One DVD Set to Rule Them All,Peter Jacksons trilogy has set the standard for fantasy films by adapting the Holy Grail of fantasy stories with a combination of fidelity to the original source and his own vision, supplemented by outstanding writing, near-perfect casting, glorious special effects, and evocative New Zealand locales. The extended editions without exception have set the standard for the DVD medium by providing a richer film experience that pulls the three films together and further embraces Tolkiens world, a reference-quality home theater experience, and generous, intelligent, and engrossing bonus features. --David Horiuchi