The Lord of the Rings: The Fellowship of the Ring (Four-Disc Special Extended Edition) 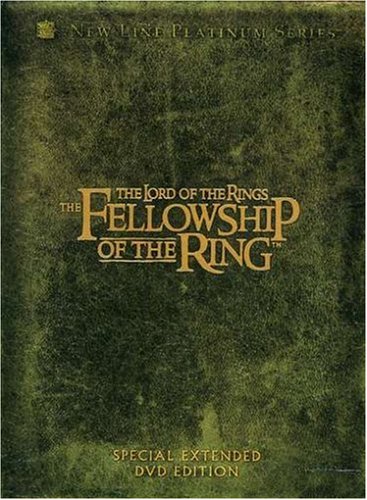 2965000
2965000
0%
available
Movies & TVStudio SpecialsWarner Home VideoAll Titles
Product Description,Not seen in theaters, this unique version of the epic adventure features over 30 minutes of new and extended scenes integrated into the film by the director.,Amazon.com,In every aspect, the extended-edition DVD of Peter Jacksons epic fantasy The Lord of the Rings: The Fellowship of the Ring blows away the theatrical-version DVD. No one who cares at all about the film should ever need to watch the original version again. Well, maybe the impatient and the squeamish will still prefer the theatrical version, because the extended edition makes a long film 30 minutes longer and theres a bit more violence (though both versions are rated PG-13). But the changes--sometimes whole scenes, sometimes merely a few seconds--make for a richer film. Theres more of the spirit of J.R.R. Tolkien, embodied in more songs and a longer opening focusing on Hobbiton. Theres more character development, and more background into what is to come in the two subsequent films, such as Galadriels gifts to the Fellowship and Aragorns burden of lineage. And some additions make more sense to the plot, or are merely worth seeing, such as the wood elves leaving Middle-earth or the view of Caras Galadhon (but sorry, theres still no Tom Bombadil). Extremely useful are the chapter menus that indicate which scenes are new or extended.,Of the four commentary tracks, the ones with the greatest general appeal are the one by Jackson and cowriters Fran Walsh and Philippa Boyens, and the one by 10 cast members, but the more technically oriented commentaries by the creative and production staff are also worth hearing. The bonus features (encompassing two complete DVDs) are far superior to the largely promotional materials included on the theatrical release, delving into such matters as script development, casting, and visual effects. The only drawback is that the film is now spread over two discs, with a somewhat abrupt break following the council at Rivendell, due to the storage capacity required for the longer running time, the added DTS ES 6.1 audio, and the commentary tracks. But thats a minor inconvenience. Whether in this four-disc set or in the collectors gift set (which adds Argonath bookends and a DVD of National Geographic Beyond the Movie: The Lord of the Rings: The Fellowship of the Ring), the extended-edition DVD is the Fellowship DVD to rule them all. --David Horiuchi