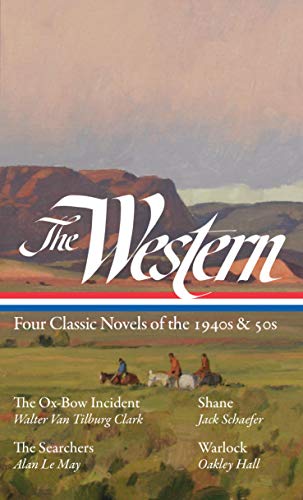 1914900
1914900
0%
available
BooksLiterature & FictionAction & Adventure
Rediscover the golden age of the Western with this collection of four unforgettable novels of honor, adventure, and violence set against the magnificent landscapes of the American frontier , ,The heroic exploits and violent struggles of the Old West come alive once more through this one-of-a-kind collection of four thrilling novels. Edited by Ron Hansen, this deluxe hardcover edition shows that the 1940s and 1950s was a golden age for the Western novel. , ,In the Pulitzer Prize-winning The Ox-Bow Incident, Walter van Tilburg Clark explores the thin line between civilization and barbarism through the story of a lynch mob that targets three innocent men, exposing a dark authoritarian impulse at work the American frontier. Set in Wyoming in 1889, a time when ranchers and cattle companies waged war with each other, Jack Schaefer's iconic Shane deploys many of the genre's most essential elements, brilliantly filtered through a boy's perceptions. Alan Le May's The Searchers, the basis for John Ford's cinematic masterpiece starring John Wayne, follows the dogged quest of two men to rescue a young girl taken prisoner by Comanche warriors. And Oakley Hall's Warlock, a novel that anticipates the later books of Cormac McCarthy and Larry McMurtry, casts the battle for control of a southwestern outpost as a bloody saga pitting a marauding gang of cowboys and rustlers against the town's defenders, led by the legendary gunslinger Clay Blaisedell. All four novels were memorably adapted for the screen, and their gripping stories--told with brisk narrative energy, psychological depth, and laconic humor--have contributed unforgettably to the Western's enduring legacy in American culture.