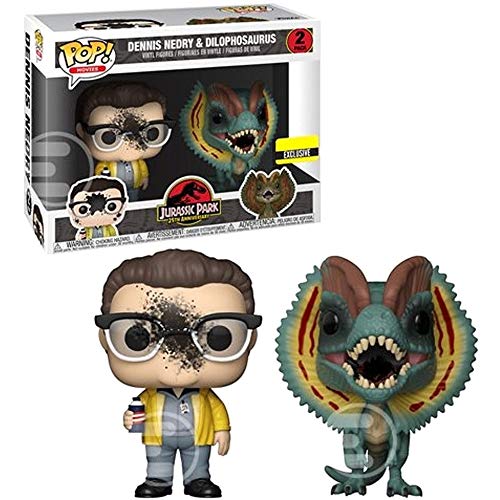 2835700
2835700
0%
available
Toys & GamesCollectible ToysStatues, Bobbleheads & BustsBobbleheads
Size:Standard Watch out for Dilophosaurus! Yeah, Dennis Nedry just didnt seem to have a whole lotta luck. First, he got himself into financial troubles, and somehow blamed John Hammond for them. Then, he cut a shady deal with Lewis Dodgson to steal some dino embryos from the Jurassic Park labs. Then, memorably, he tried to drive one of those Jeeps in the middle of a tropical storm to try to get off the island. Yup, didnt end well! Nedry got dilophosaurus goo all up in his business, and he managed to create havoc across the island, too. Of course, the action of the movie wouldnt have happened without him setting it in motion, so we should probably give him some credit for driving the plot of an all-time great flick. So, the only thing to do when youve got a memorable character in mind? Youve got to get the Funko Pop! version of them! Funkos all too happy to oblige, and theyve created thisJurassic Park Dennis Nedry and Dilophosaurus 2 Pack. Featuring vinyl figures of both Nedry with the spit/goo on his face, and a Dilophosaurus with its frills up, ready to spit. This 2 pack is sure to be an instant hit. Fun Details This 2 pack set comes with 2, count em 2, Funko Pop! vinyl figures. They each measure about 3 and 3/4 inches tall, and have the signature style from the Pop! series. This 2 pack comes to you packaged in a window display box, so you can display them as you desire. Check out all of our Pop! Movies Jurassic Park vinyl figures to get the entire set! - 2 Vinyl Figures - Display Base