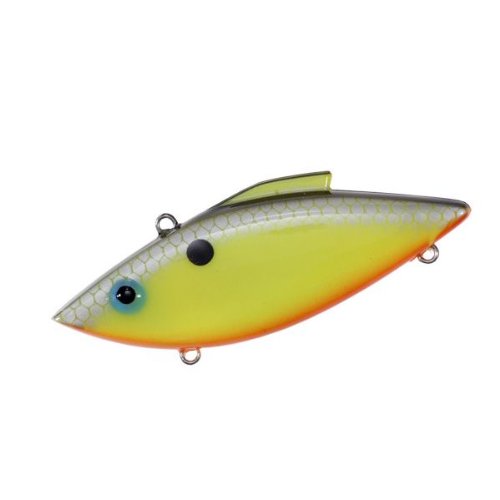 869500
869500
0%
available
Sports & OutdoorsSports & FitnessHunting & FishingFishingLures, Baits & AttractantsLuresTopwater Lures
Turn on the Light Tackle action and switch up to a 1/8oz. Tiny-Trap or 1/4oz. Mini-Trap. When lakes get too much fishing pressure downsizing to a Tiny-Trap or Mini-Trap can make the difference in catching fish. Dropping temps also make these lures good choices as the fish’s metabolism slows down a bite size meal becomes more tempting. These light weight ‘Traps also make an excellent choice for panfish. Many lunker Crappie have fallen victim to these two tenacious ‘Traps. Bill Lewis’ legendary invention, the Rat-L-Trap, is recognized as the most popular, and consequently, the most imitated lure over the past 35 years. But imitation doesn’t mean duplication. Just ask any of the “Who’s Who” of top name Pros that used Rat-L-Trap imitations while competing against Boyd Duckett at the 2007 BASSMASTER CLASSIC. Boyd wasn’t paid to fish with the original Rat-L-Trap, he made that decision himself and ‘BOY OH BOYD’ was it the right one! The fact is that while dozens of lure companies have spent the last 30 years trying to make a lure as good as the Rat-L-Trap, we’ve been making the Rat-L-Trap better and better. Today’s Rat-L-Trap is proven by leading experts to produce sound qualities nearly identical to those of schooling baitfish under attack. These sounds are the ‘Dinner Bell’ for predator fish.