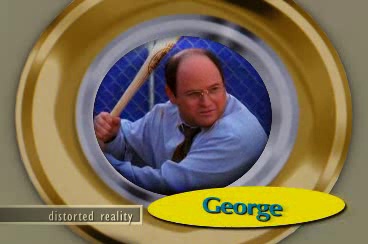 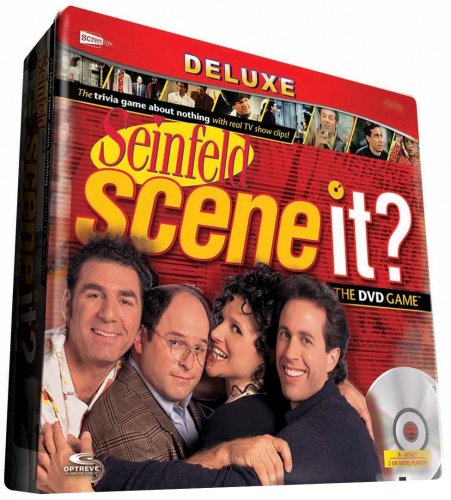 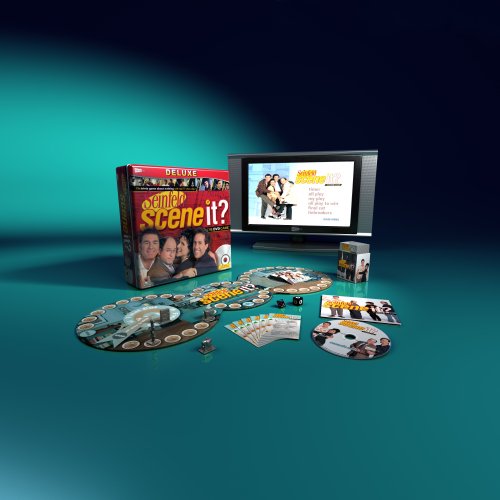 1693100
1693100
0%
available
Toys & GamesGames & AccessoriesDVD Games
Amazon.com,Prove your TV trivia prowess to friends and family with the Scene It? Seinfeld Deluxe Edition DVD board game for adults. This entertaining trivia game will have you racing around the game board as you try to tackle brainteasers and answer questions as you relive some of your favorite scenes from all nine seasons of one of Americas most popular television shows.,What We Think,Fun Factor:,Durability:,(what this means),The Good: Easy to set up and fun to play,The Bad: Occasional occurrence of less-than-challenging brainbuster questions,In a Nutshell: A witty, engaging DVD board game that highlights the hilarity and fun of the popular television show,At a Glance,Ages: Adult,Requires: Television and DVD player with remote control,Scene It? Seinfeld Deluxe Edition DVD game is a fun way to challenge your brain while enjoying popular scenes from the hit television show about nothing. View larger.,Game includes a DVD, trivia cards, and dice -- everything you need to gets started.,So You Think You Know Seinfeld...?,The Scene It? Seinfeld Deluxe Edition DVD game is a fun, entertaining way to challenge your brain while enjoying popular scenes from the famous hit television show. Before getting started players will benefit from using either the included quick start guide or the on-screen tutorial for a run-through of how the game is played. To set up the game put the included DVD into your player and choose one player as the DVD Master who will operate the remote control throughout the game.,Next, decide whether youd like to play a shorter or longer version of the game and fold the included Flextime game board accordingly. Each player then chooses a metal token and places it on the start space. Each turn a player rolls both the numbered die and the eight-sided category die. The numbered die indicates how many spaces forward the player may move upon successfully completing the challenge associated with the category indicated on the category die.,Challenges associated with the various categories range from answering questions following a scene played on the DVD to answering questions indicated on the included trivia Cards. Once a player has made their way to the end of the game path, they have the opportunity to win the game by either successfully beating all players in a final All Play To Win challenge or by successfully completing the Final Cut challenge.,Alternatively, if a board game is not your style or if youd simply like to entertain party guests throughout the evening, you may choose the Party Play function on the Main Menu of the DVD. In this mode the DVD shuffles among a variety of scenes and challenges automatically so that you and your guests can enjoy one great clip or puzzler after the other all night long.,Yada-Yada-Yada!,The Scene It? Deluxe Seinfeld Edition DVD board game is a witty, entertaining game that is ingeniously designed to engage an entire room full of players. The versatile Flextime game board features brightly colored graphics and allows players to choose between a longer or shorter game. The cleverly designed metal game tokens are modeled after props made famous in some of Seinfelds most beloved scenes.,The included DVD is full of hilarious clips and brain-busting trivia from all nine seasons of the witty television show. One of the best features of the Seinfeld DVD game is the Party Play option that allows fans and players to watch clips and answer brainteasers one after another on the DVD automatically without having to navigate with a remote control.,Whats in the Box,Game DVD, one Flextime game board, four metal game tokens, one six-sided numbered die, one eight-sided category die, 16 Buzz cards, and 175 Trivia cards.,From the Manufacturer,Man hands, Manssieres, Yo-Yo Ma, and Yada Yada Yada, Scene It? Deluxe Seinfeld Edition has everything you love from the show about nothing. Race around the flextime game board as you relive your favorite. Seinfeld moments and test your knowledge with on-s