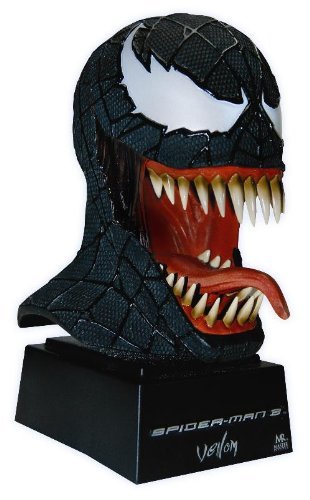 9996900
9996900
0%
available
Toys & GamesNovelty & Gag ToysMiniatures
In Spider-Man 3, Peter Parker has finally managed to strike a balance between his devotion to Mary Jane and his duties as a superhero. But when his suit suddenly changes, turning jet black and enhancing his powers, it transforms Peter as well, bringing out the dark, vengeful side of his personality that he must struggle to control. Forced to choose between the seductive power of the new suit and the compassionate hero he used to be, Peter must overcome his personal demons as two of the most-feared villains yet, Sandman and Venom, gather unparalleled power and a thirst for retribution to threaten Peter and everyone he loves.,At long last, Venom - the villain that comic fans have been clamoring to see since the very first Spider-Man film was announced - makes his way to the big screen.and fans wont be disappointed! With character designs lifted directly from the film, Venom truly serves as one of the nastiest rogues Spider-Man has ever faced. And now, Master Replicas is proud to present the Venom Mask Scaled Replica, this resin reproduction accurately replicates the alien symbiote in all of his rage-filled glory. The Venom Mask Scaled Replica features all of the attention to authentic detail youve come to expect from Master Replicas, scaled down to a smaller size for easier display options.,- Stands over 7 inches tall, including custom Spider-Man 3 display stand,- Made from high-quality molded plastics and resin, authentically replicating Venoms on-screen textures,- Includes collateral and Certificate of Authenticity,Add all three of the Spider-Man 3 Scaled Replica masks - Spider-Man, Black-Suited Spider-Man, and Venom - to your collection today!,Measures approximately 7 x 5.3 x 4