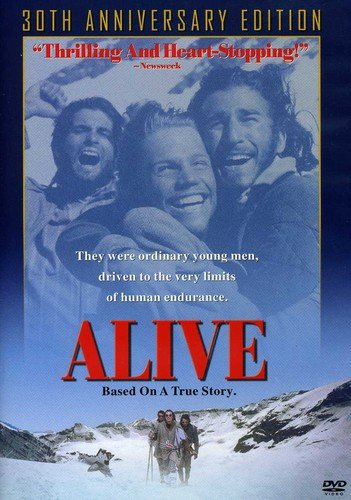 772500
772500
0%
available
Movies & TVGenre for Featured CategoriesAction & Adventure
Product Description,Witness ALIVE, the thrilling true-life adventure of challenge and survival! In this action-packed hit, a team of tough rugby players survive a plane crash deep in the desolate, snow-covered Andes. Stranded there, they must overcome incredible odds to stay alive! See for yourself the unforgettable story of ordinary young men who find courage in the face of disaster and test the very limits of human endurance! Its an astonishing death-defying triumph that will both entertain ... and inspire you!,Amazon.com,In 1972 a chartered plane carrying a Uruguayan rugby squad and various family members crashed in the Andes. If that sounds dry and matter-of-fact, you havent seen director Frank Marshalls harrowing re-creation Alive, an adrenaline-pounding, heart-in-your-mouth spectacle that kicks off this famous story of survival. The real-life against-all-odds odyssey made worldwide headlines when it became known that the survivors ate their own dead to survive. What could have easily become sensationalistic exploitation is treated with compassion and dignity by Marshall as he explores their moral and spiritual struggles as well as their physical ordeal. As team captain and base-camp cheerleader Vincent Spano slowly collapses under the stress and Ethan Hawke rouses from mourning his dead family to taking charge of saving himself, it also becomes a portrait in leadership, hope, and emotional courage. --Sean Axmaker