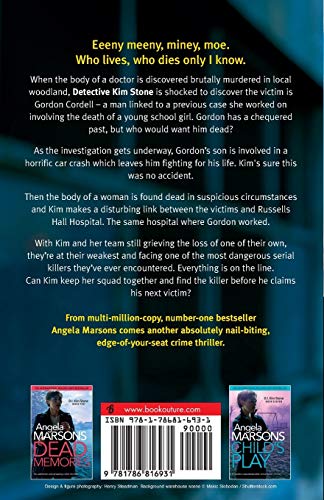 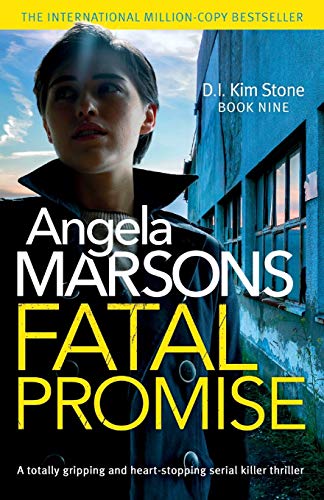 925300
925300
0%
available
BooksMystery, Thriller & SuspenseThrillers & Suspense
Eeeny meeny, miney, moe. Who lives, who dies only I know. ,When the body of a doctor is discovered brutally murdered in local woodland, Detective Kim Stone is shocked to discover the victim is Gordon Cordell – a man linked to a previous case she worked on involving the death of a young school girl. Gordon has a chequered past, but who would want him dead? ,As the investigation gets underway, Gordon’s son is involved in a horrific car crash which leaves him fighting for his life. Kim's sure this was no accident. ,Then the body of a woman is found dead in suspicious circumstances and Kim makes a disturbing link between the victims and Russells Hall Hospital. The same hospital where Gordon worked. ,With Kim and her team still grieving the loss of one of their own, they’re at their weakest and facing one of the most dangerous serial killers they’ve ever encountered. Everything is on the line. Can Kim keep her squad together and find the killer before he claims his next victim? ,The killer is picking off his victims at a terrifying pace, and he’s not finished yet. ,From multi-million copy number one bestseller Angela Marsons comes another absolutely nail-biting, edge-of-your-seat crime thriller. ,Read what everyone is saying about Fatal Promise: ,‘Marsons for me is the QUEEN of this genre. She knows how to add the human touch to each story and I just adore her. Bloody FABULOUS.’ Postcard Reviews ,‘Oh my god!! I honestly have no idea how she does it, but once again, Angela has brought DI Kim Stone back to life in all her fabulous glory!!... Absolute masterpiece…’ Goodreads Reviewer, 5 stars ,‘Angela Marsons has now been officially awarded my Queen of Crime Writing accolade following this book…if you are going to read one book this year then make it this one… I guarantee you will absolutely not regret it.’ Stardust Book Reviews, 5 stars ,‘This one is definitely one of the best…once again, the plotting and storyline is clever and insightful with excellent suspense and thrills...’ Goodreads Reviewer, 5 stars ,‘Expertly plotted—once again the author demonstrates her real talent for bringing her characters and plot to life… A fascinating read full of twists and turns…If you haven't read any of her books yet then you are seriously crazy! What are you waiting for!’ Chapterinmylife, 5 stars ,‘Yet again Angela Marsons delivers a winner… At one point I couldn't see the page for tears of sadness and on another occasion absolutely creased with laughter at the banter between Kim and Bryant…an amazing series and the standard has never dropped… It is full of drama, laughter and tears. I have no hesitation in recommending this book and the series.’ Goodreads Reviewer, 5 stars ,‘A brilliant thriller!!... hands down this is my favourite crime series out there at the moment - it is a cracking story and I will be recommending this one over and over!!’ Donna’s Book Blog, 5 stars ,‘Fatal Promise should be a compulsory read for everyone!!!! …A brilliant fast paced read with oodles of brilliant shocking twists.’ Goodreads Reviewer, 5 stars