Above the Law: The Inside Story of How the Justice Department Tried to Subvert President Trump 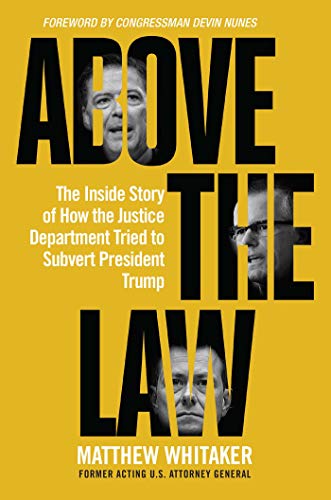 Above the Law: The Inside Story of How the Justice Department Tried to Subvert President Trump
Matthew Whitaker
952.54404کیلوگرم
168451049X

1771200
1771200
0%
available
BooksPolitics & Social SciencesPolitics & Government
Matthew Whitaker came to Washington to serve as chief of staff to Attorney General Jeff Sessions, and following Sessions’s resignation, he was appointed Acting Attorney General of the United States. A former football player at the University of Iowa who had been confirmed by the Senate as a U.S. Attorney, Whitaker was devoted to the ideals of public service and the rule of law. But what he found when he led the Department of Justice on behalf of President Trump were bureaucratic elites with an agenda all their own. , ,The Department of Justice had been steered off course by a Deep State made up of Washington insiders who saw themselves as above the law. Recklessly inverting, bending, and breaking the law to achieve their own political goals, they relentlessly undermined the Constitution by flaunting the rightful authority of a President they despised. , ,Whitaker was an outsider with a desire to see justice done and democracy work. In his straightforward new book, Above the Law, he provides a stunning account of what he found in the swamp that is Washington. Whitaker reveals: , ,• How former FBI Director James Comey and top figures in the Justice Department openly worked against President Trump , ,• How the Deep State relies on the complicity of the mainstream media to achieve its ends , ,• How the Deep State—drawing on elite universities and corporate law firms—perpetuates itself, keeping a small clique of people in power to ensure that nothing ever changes , ,• How Robert Mueller’s investigation into alleged Russian collusion quickly concluded there was no evidence of wrong- doing by the President or his campaign but nevertheless produced a massive report that was intended as an act of political subversion , ,If you had any doubts that the Deep State actually exists, that it perpetuates a government of insiders, and that it inexorably pursues a political agenda of its own, then you will find Whitaker’s first-person account eye-opening and utterly convincing.