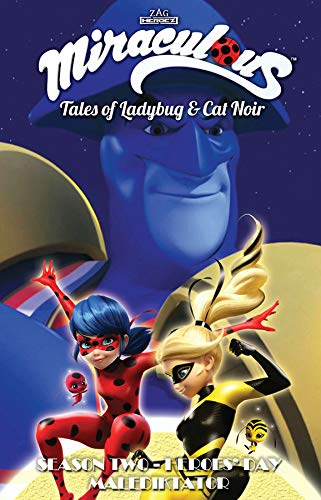 687200
687200
0%
available
BooksChildren's BooksComics & Graphic Novels
This special trade collects the episode "Malediktator" and reprints the "Replay" story from Miraculous: Adventures of Ladybug & Cat Noir. , , , ,In “Malediktator”, Chloé plans to leave Paris, leading her father to become akumatized! As Malediktator, he can make people do whatever he commands when hit with his words. With Cat Noir forced to behave like a cat, Ladybug must team up with Queen Bee! , , , ,"Replay" is the first original illustrated story based on Zag Entertainment's Miraculous: Tales of Ladybug and Cat Noir. When Adrien outplays a lacrosse player, Hawk Moth akumitizes him. Becoming Replay, he gains the ability to control time around him. Will Ladybug and Cat Noir be fast enough to defeat him? Or will he stop their heroics once and for all? , , , ,SPOTS ON, CLAWS OUT! , , ,