Denmark Vesey’s Garden: Slavery and Memory in the Cradle of the Confederacy 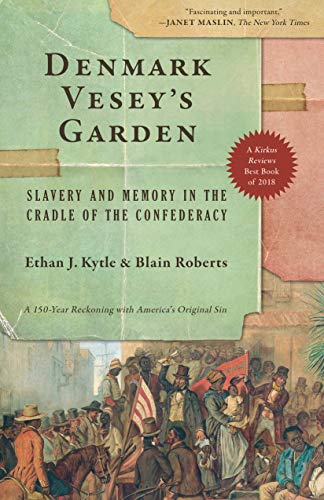 1249800
1249800
0%
available
BooksHistoryAmericas
One of Janet Maslin’s Favorite Books of 2018, The New York Times , ,One of John Warner’s Favorite Books of 2018, Chicago Tribune , ,Named one of the Best Civil War Books of 2018” by the Civil War Monitor , ,A fascinating and important new historical study.” ,Janet Maslin, The New York Times , ,A stunning contribution to the historiography of Civil War memory studies.” ,Civil War Times , ,The stunning, groundbreaking account of “the ways in which our nation has tried to come to grips with its original sin” (Providence Journal) ,Hailed by the New York Times as a “fascinating and important new historical study that examines . . . the place where the ways slavery is remembered mattered most,” Denmark Vesey’s Garden “maps competing memories of slavery from abolition to the very recent struggle to rename or remove Confederate symbols across the country” (The New Republic). This timely book reveals the deep roots of present-day controversies and traces them to the capital of slavery in the United States: Charleston, South Carolina, where almost half of the slaves brought to the United States stepped onto our shores, where the first shot at Fort Sumter began the Civil War, and where Dylann Roof murdered nine people at Emanuel A.M.E. Church, which was co-founded by Denmark Vesey, a black revolutionary who plotted a massive slave insurrection in 1822. ,As they examine public rituals, controversial monuments, and competing musical traditions, “Kytle and Roberts’s combination of encyclopedic knowledge of Charleston’s history and empathy with its inhabitants’ past and present struggles make them ideal guides to this troubled history” (Publishers Weekly, starred review). A work the Civil War Times called “a stunning contribution, ” Denmark Vesey’s Garden exposes a hidden dimension of America’s deep racial divide, joining the small bookshelf of major, paradigm-shifting interpretations of slavery’s enduring legacy in the United States.