The Qur'an: A Complete Revelation (Reference Edition - English Only) 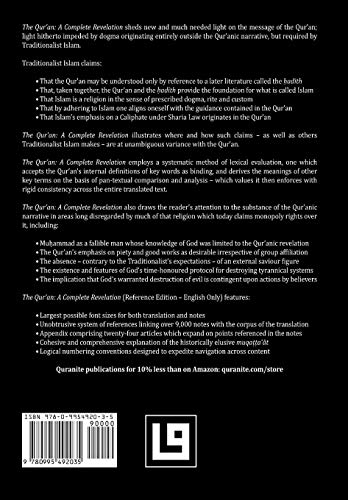 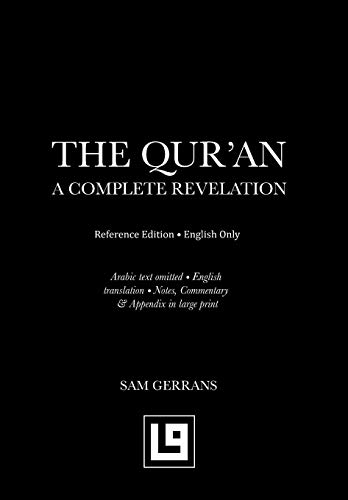 3906300
3906300
0%
available
BooksReligion & SpiritualityIslam
The Qur'an: A Complete Revelation sheds new and much needed light on the message of the Qur'an; light hitherto impeded by dogma originating entirely outside the Qur'anic narrative, but required by Traditionalist Islam. , ,Traditionalist Islam claims: , ,– That the Qur'an may be understood only by reference to a later literature called the hadith , ,– That, taken together, the Qur'an and the hadith provide the foundation for what is called Islam , ,– That Islam is a religion in the sense of prescribed dogma, rite and custom , ,– That by adhering to Islam one aligns oneself with the guidance contained in the Qur'an , ,– That Islam’s emphasis on a Caliphate under Sharia Law originates in the Qur'an , ,The Qur'an: A Complete Revelation illustrates where and how such claims – as well as others Traditionalist Islam makes – are at unambiguous variance with the Qur'an. , ,The Qur'an: A Complete Revelation employs a systematic method of lexical evaluation, one which accepts the Qur'an’s internal definitions of key words as binding, and derives the meanings of other key terms on the basis of pan-textual comparison and analysis – which values it then enforces with rigid consistency across the entire translated text. , ,The Qur'an: A Complete Revelation also draws the reader’s attention to the substance of the Qur'anic narrative in areas long disregarded by the religion which today claims monopoly rights over it, including: , ,– Muhammad as a fallible man, one whose knowledge of God was limited to the Qur'anic revelation , ,– The Qur'an’s emphasis on piety and good works as desirable irrespective of group affiliation , ,– The absence – contrary to the Traditionalist’s expectations – of an external saviour figure , ,– The existence and features of God’s time-honoured protocol for destroying tyrannical systems , ,– The implication that God’s warranted destruction of evil is contingent upon actions by believers , ,The Qur'an: A Complete Revelation (Reference Edition – English Only) features: , ,– Largest possible font sizes for both translation and notes , ,– Unobtrusive system of references linking 9,000 notes with the corpus of the translation , ,– Appendix comprising twenty-four articles which expand on points referenced in the notes , ,– Cohesive and ­comprehensive explanation of the historically elusive muqattaʿat , ,– Logical numbering conventions designed to expedite navigation across content , ,Quranite publications for 10% less than on Amazon: quranite.com/store