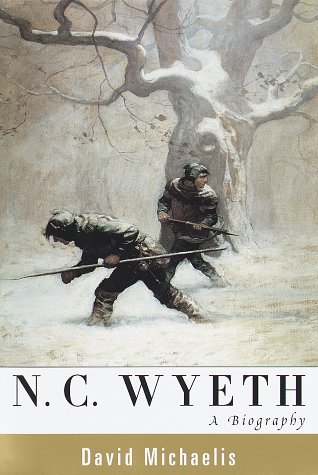 2314400
2314400
0%
available
BooksArts & PhotographyHistory & Criticism
An American painting dynasty is portrayed in this huge, riveting biography of N. C. Wyeth. , ,His name summons up our earliest images of the beloved books we read as children. His illustrations for Scribner's Illustrated Classics (Treasure Island, Kidnapped, The Last of the Mohicans, The Yearling) are etched into the collective memory of generations of readers. He was hailed as the greatest American illustrator of his day. For forty-three years, starting in 1902, he painted landscapes, still lifes, portraits, and murals as well as illustrations for a long shelf of world literature. Yet he proclaimed "the uselessness of clinging to illustration and hoping to make it a great art." He judged himself a failure, believing that illustration was of no importance. , ,Despite the darkness of his temperament, he was a towering figure of gargantuan appetites and physical power. His passions were rooted in the nineteenth century. He made adventure, nature, and "the vastness of things" his earliest personal themes. America was his canvas. , ,David Michaelis's biography of N. C. Wyeth tells the story of his family through four generations. It is ,a family saga that begins and ends with the accidental deaths of small boys, a gothic tale that shows how N.C., while learning to live a safe and familiar domestic life, endangered himself and his children by concealing part of the family legacy--depression, suicide, incest. , ,We see how his mother's emotional instability and his father's strictness set the stage for his profoundly divided personality. He found in fatherhood the foremost expression of his character--trying to create in the Wyeth homestead his dream of childhood at its most enchanting. He held his children enthralled through their adult lives. He persuaded his inventor son, Nat, to live at home, shepherded his daughter Ann's career as a composer, and taught his three other children--Henriette, Carolyn, and Andrew (N.C. was Andrew's only teacher)--to paint. , ,The illustrations that N. C. Wyeth undervalued are now regarded as American classics--the paintings that appeared in Treasure Island, Kidnapped, and The Last of the Mohicans are in museums, joining, as John Updike wrote, "the mainstream of American easel painting." , ,His work lives. The artist himself is brought alive in David Michaelis's fully realized portrait of this huge-spirited, deeply complicated man, his family, and an America that was quickly vanishing.