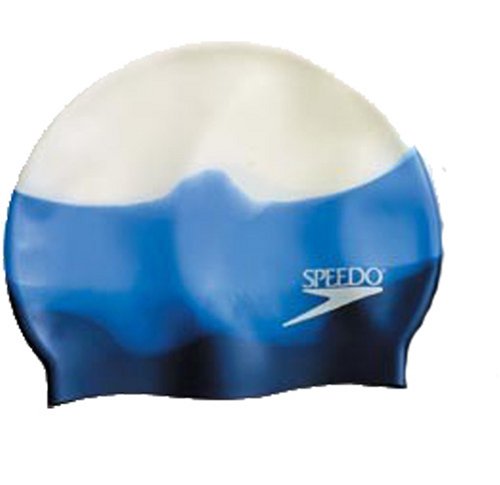 908400
908400
0%
available
Sports & OutdoorsSports & FitnessSwimmingSwim Caps
Product Description,A beautiful lightweight and durable cap which comes in multiple colors and is designed to hold dome shape and rounded fit with no wrinkles, which reduces drag. The silicone allows the head to breathe for a more comfortable fit and can be stretched to more than double its original size. Quick and easy to take on and off while not snagging hair.,Amazon.com,Swim in style with Speeds silicone composite swim cap featuring a head-turning multi-colored design. The graduated stretch silicone stretches easier on top for increased comfort, and gradually stretches less towards the bottom of the cap to provide a secure fit. The coloring starts dark at the bottom but gently lightens its shade as it rises to the top of the dome, which is white. Resistant to hair snagging and tearing, its designed to hold its domed shape and rounded fit with no wrinkles, helping to reduce drag. The silicone allows the head to breathe for a more comfortable fit and can be stretched to more than double its original size.,About Speedo,In 1914, Speedo was founded in Australia by Alexander MacRae, a 22-year-old Scottish immigrant who arrived in the country in 1910. The company began when MacRae Hosiery manufacturers, established by Alexander in 1914, extended the manufacture of underwear to swimwear and became MacRae Knitting Mills. A naming competition was held by the staff in 1928 and won by a Captain Parsonson, who coined the slogan, Speed on in your Speedos. In 1929, the first swimsuits were in production and it didnt take long for Speedo to successfully establish itself. World War II caused the brand turn over 90% of its manufacturing to war production, providing the armed services with vital equipment such as mosquito nets. After the war, Speedo opened a new factory and was able to re-establish itself, due to increased demand for swimsuits. In 1951, Speedo Knitting Mills (Holdings) Ltd, was incorporated and became a publicly traded company on the Sydney Stock exchange.,Speedo hit the international stage in earnest, at the 1956 Melbourne Olympic Games, and a few years later the brand grew on a more global scale. Export sales to the USA began and an international division was set up to monitor trade in New Zealand, Japan and South Africa. The expansion of the brand continued, and in 1976, Speedo was appointed as the official swimwear for the 1976 Montreal Olympics, where 52 out of 54 countries wore their swimsuits.,Speedo continues to make its mark in the pool and on the beach today. Many world class athletes who wear Speedo include U.S. phenomenon Michael Phelps, legendary Australian swimmer Grant Hackett, world record holder Kosuke Kitajima from Japan, and Hollands Inge de Bruijn.,Whats in the Box?,Speedo Silicone Composite swim cap